Based on retail banking needs, the testing will be primarily focusing on graph queries and graph computing performances:

For non-performance functionality related features, the following areas are tested:

Both systems are deployed in cluster setup:

Note that, the bank’s on-premise cloud environment is supposedly ACS (Advanced Cloud Services) which is based on Microsoft Azure with some special network adaptations, think ACS for the bank’s private cloud as AWS for the public cloud. Due to Neo4j’s incompatibility with ACS, we had to resolve to use bare-metal cluster setup to conduct the following testing.

Randomized queries against nodes and edges by their IDs. The queries are repeated 1,000 times for each type, total time and average individual query time are counted. If TPS (transactions per second) is counted, it’s also recorded.

Note that all numbers below are in milliseconds (ms), unless otherwise annotated. 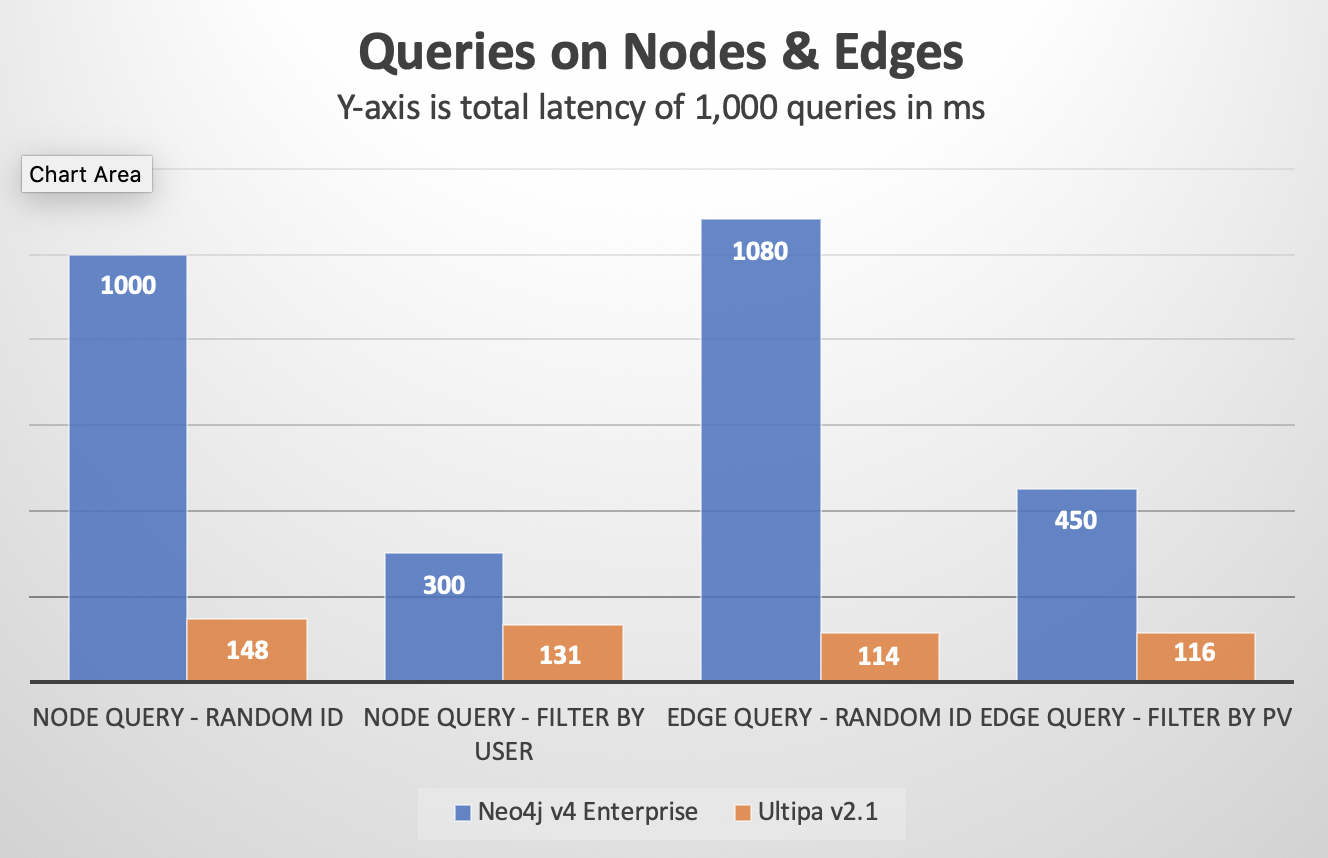 Randomly inserting 1,000 nodes and 1,000 edges. Count the total time and average time of per insertion. All operations latencies are counted in milliseconds (ms). 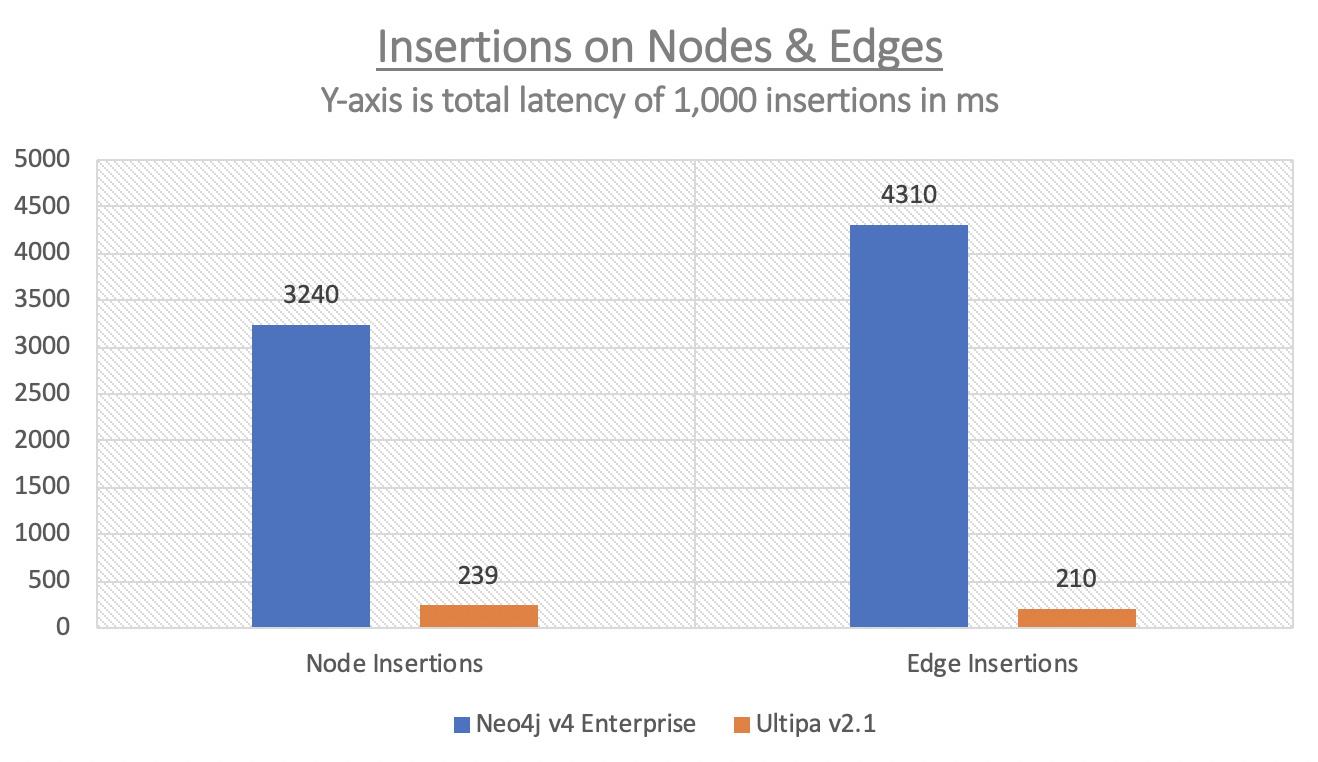 Randomly query against N pairs of nodes, the search depths are 1-hop, 3-hop or 5-hop.

When searching with filters, using the PV attribute tagged on each edge (relationship).

For 1 and 3-hop path queries, random ID pairs are used for testing.

For 5-hop queries, due to this testing dataset’s topology characteristics, to ensure results are available for easier latency comparison, the following pairs of IDs are pre-selected:

To understand the testing dataset’s “challenge”, let’s use the following simple math, based on average node degree, which stands at 20:

Given hotspot nodes, they are usually orders of magnitudes more heavily connected, therefore making traversing or querying against such nodes way more challenging. It’s highly probable to see that when counting any node’s neighbors that are 4 or 5-hop away, hotspot nodes will be encountered! Due to this challenge, we therefore limit the 5-hop deep path query to be only 1, and latency to be within 1800 seconds, for Neo4j to make sure we do NOT have to wait extensively long for results. The same types of 5-hop deep path queries were conducted 7 times by Ultipa to see how consistent its performance was.

Note that for path queries, a 30-min cap is set for each query, if the query does NOT return within 30-min, the query will be killed. Given Neo4j enough time, say, a few hours, it may eventually return with results. 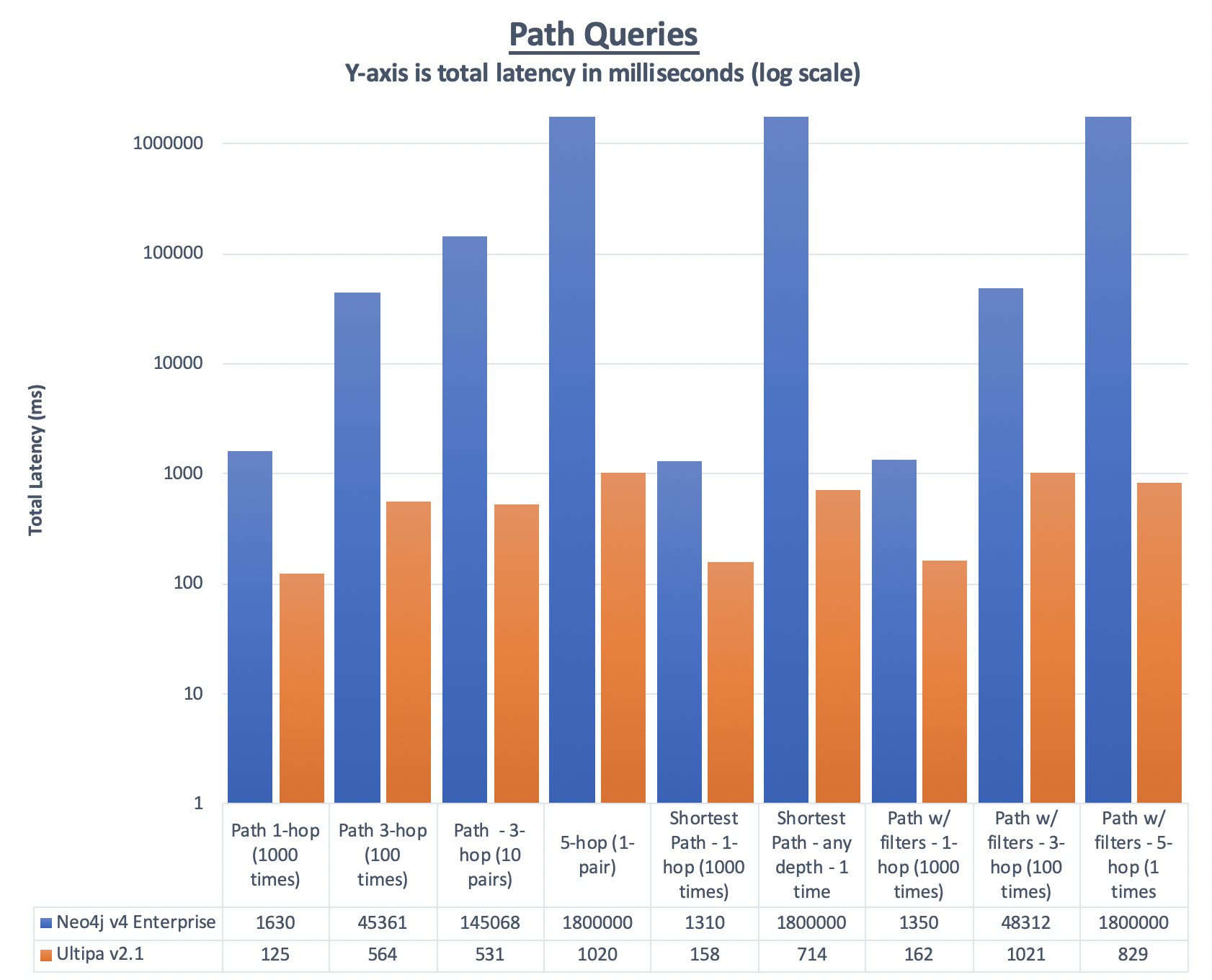 The K-hop testing is to calculate the number of neighbors of a certain starting node that are exactly K-hop away, given certain filtering rules.

Note the definition of K-hop is that if a node appears to be the starting node’s k-hop neighbor, their shortest path in-between must be of K hops in length.

The filtering condition is by edge’s PV attribute. All queries are randomized and repeated 1,000 or 100 times, given the query depth. 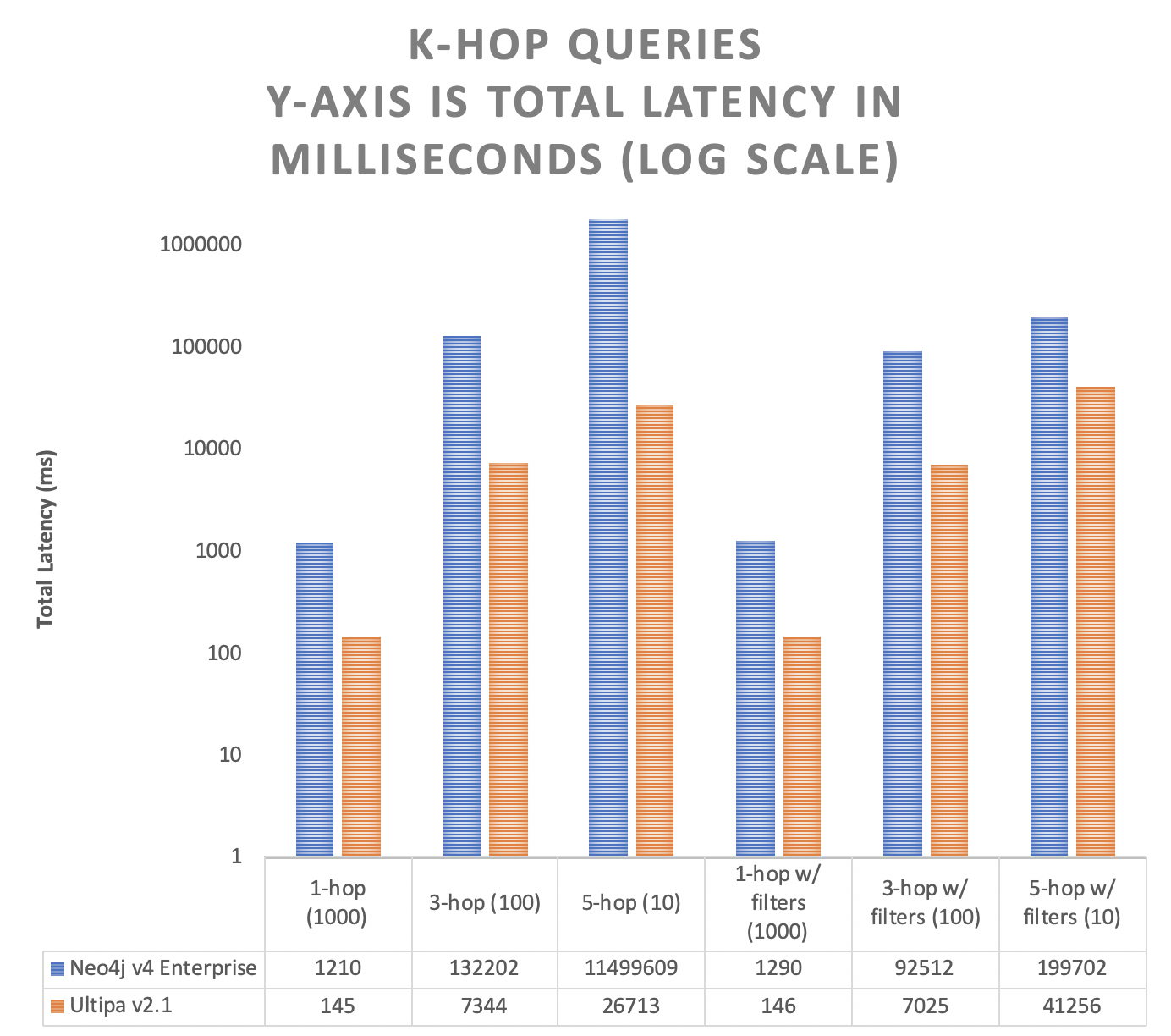 Algorithms testing are conducted around the following areas:

In-degree, out-degree or degrees are commonly used basic graph algorithms, the testing are conducted to measure Neo4j and Ultipa’s performance. 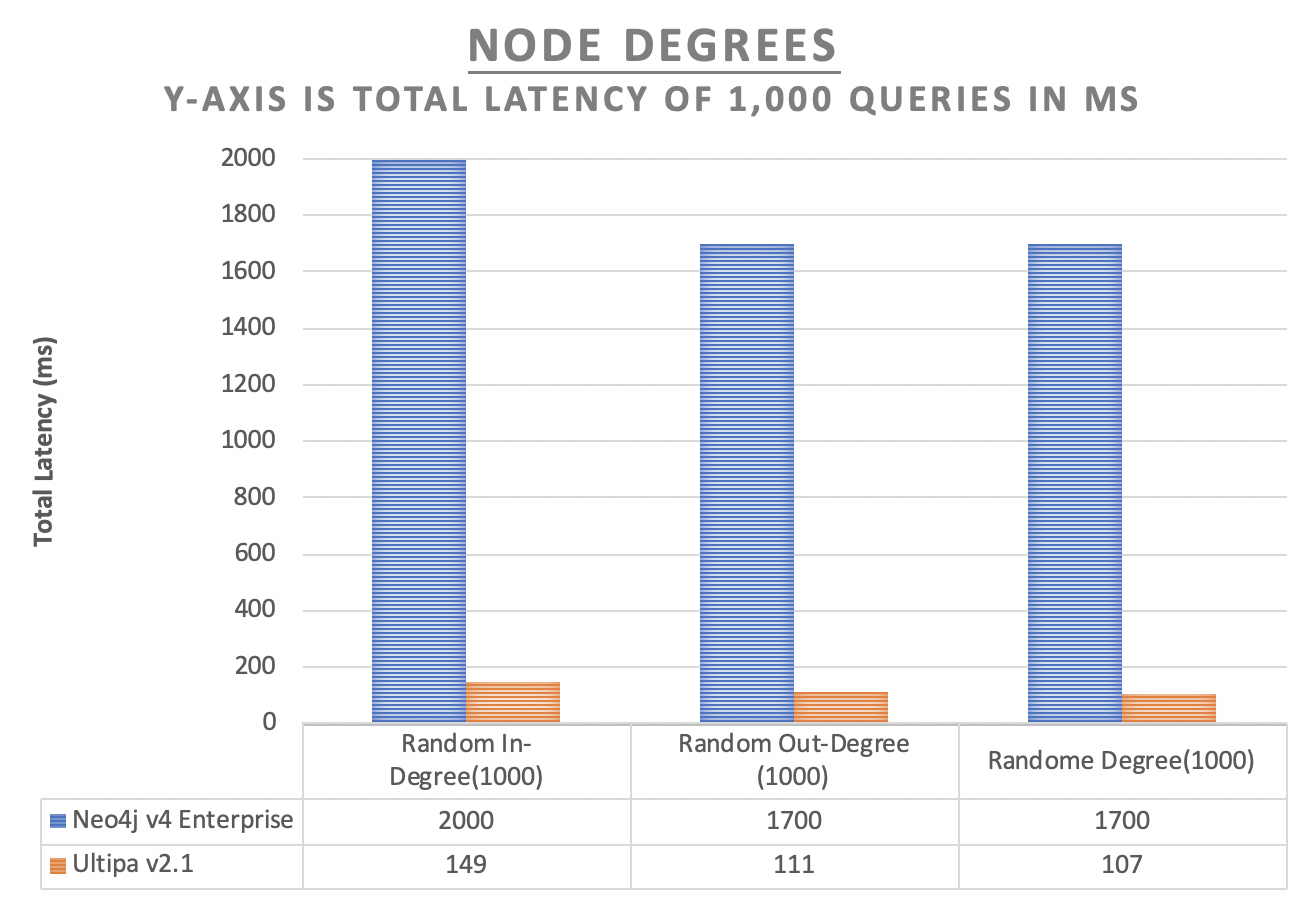 Jaccard Similarities are used in the following benchmarks.

There are 2 types of Jaccard Similarities:

LPA (Label Propagation Algorithm) and Louvain are two commonly used graph algorithms, though Louvain is considerably more sophisticated than LPA, the benchmark results are captured in the following table:

The following key features are compared: 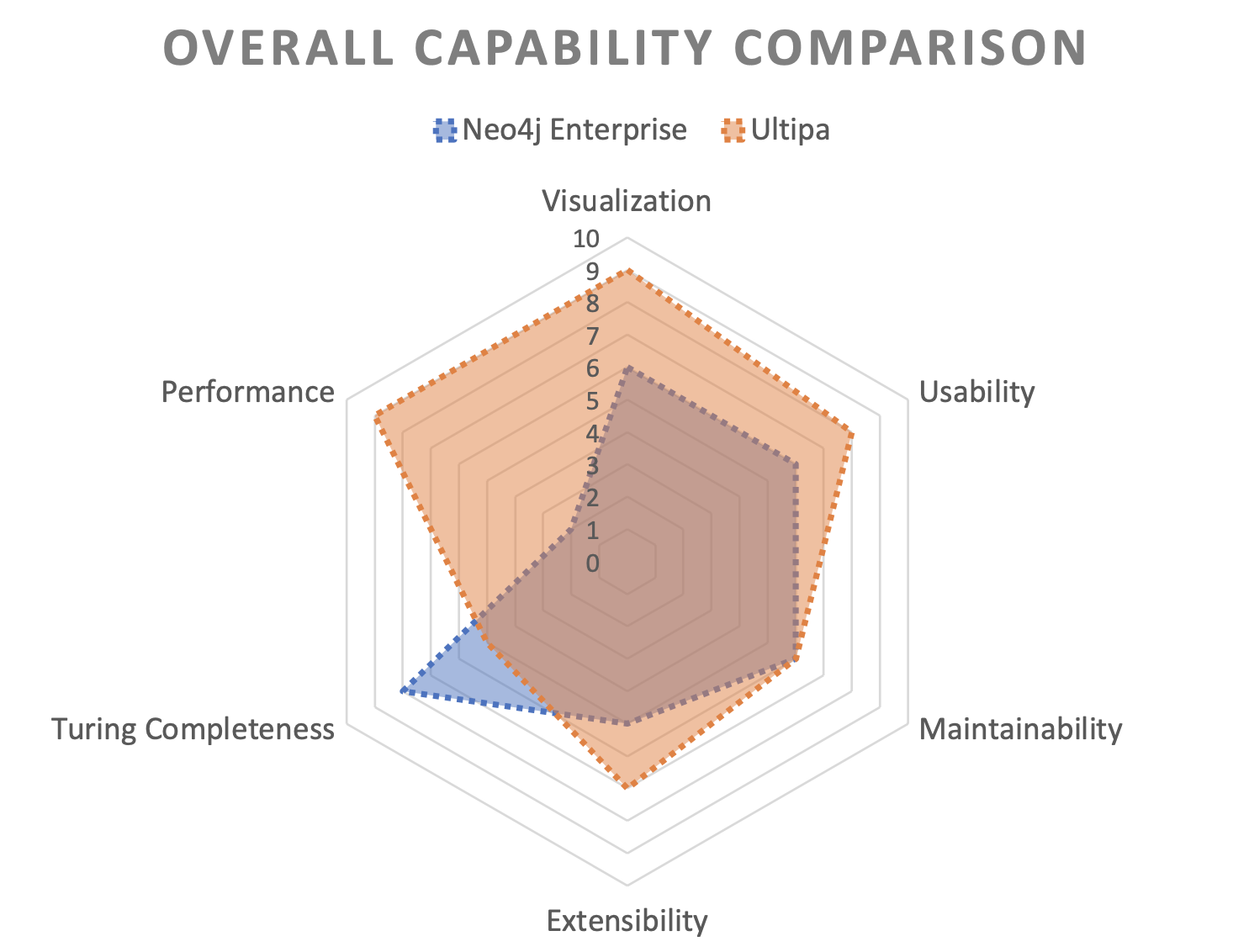